Stop killing kittens. Or, how to use pytest.fixtures to remove redundancy in your test suite

Last week I wrote about how pytest.mark.parametrizing can be used to remove some redundancy in your test suite. Today let’s talk pytest.fixture and how it helps you to clean up the mess that is your test suite with reusable variables, connections and/or objects. 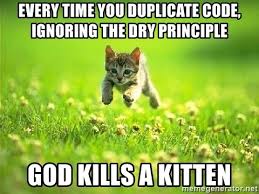 If you obey the testing goat like you should, you practice Test-Driven-Development. Therefore you make sure to code in small incremental steps. During the refactoring phase, you will notice that repetition is omnipresent. You always pass the same data to the tests and you often instantiate the same objects. However, instead of running the same code for every test, you can attach so-called fixture functions to the test, that run and return the data to the test when needed in a reliable, consistent and repeatable manner.

Let’s try this in an example.

So, you have a class MyClass and you always use the same instance of the class in your test suite.

Instead of instantiating MyClass on every test, you can add a pytest.fixture and pass it as an argument to every test. Fixture functions are registered by marking them with @pytest.fixture.

Defining the fixture within test_myclass.py comes with the trade-off that you limit the scope of your fixture to the test_myclass.py test file - it cannot be used in another test file that way. So what do you do? Define the same fixture in another class? No, that would cause code repetition again. Luckily pytest has a solution for that.

To make fixtures available to your entire test suite you use a conftest.py file in your tests folder. In this file you store the fixtures you plan to use across your tests.

Now that conftest.py is present. For every test function that has myclass, pytest will pass the return value of myclass() fixture to the test function.

Instead leverage fixtures and the concept of dependency injection, which means that an object (the fixture) supplies the dependencies to another object (the test function). This concept makes for a very modular, better manageable and repetition-free test suites.